TOM SAWYER AND MATCHES THE MUSICALS BACK IN PARIS 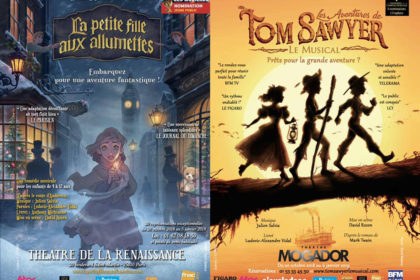 Tom Sawyer The Musical is back from October 20th at Théâtre Mogador in Paris. After 11 nominations last year at Trophées de la Comédie Musicale (French Musicals Awards), winning 3 of them (Best Original Score, Best Family Musical, Audience Choice Award), new audiences are about to discover the adventures of the world-famous carefree teenager.

Matches The Musical is back from October 20th at Théâtre de la Renaissance in Paris. Nominated for Les Molières Awards in 2016, the show tells the story of a young orphan girl who travels to the other side, a fantastic kingdom where she is a princess who must defeat the cruel Fragotov to save her late grandmother, who is still alive and the queen of this kingdom.