ORCHESTRATIONS OF THE ADVENTURES OF TOM SAWYER

The Adventures of Tom Sawyer orchestrated by Larry Blank and Antoine Lefort.

Ludovic-Alexandre and Julien are proud and happy to collaborate with Larry Blank and Antoine Lefort for the orchestrations of The Adventures of Tom Sawyer.

On his side, Antoine Lefort is a young French orchestrator and musical director based in Paris with credits including Cole Porter’s Ambassador Revue in Paris, New: the improvised musical, Paris Chéri(e)s, Chambre 113 at Théâtre de Ménilmontant and Gospel Project. He collaborated with famous performers such as Michel Jonasz, Julie Zenatti, Julie Fuchs and Nathalie Manfrino, and with different orchestras such as Orchestre National de Lille, Orchestre Symphonique de Bretagne and Orchestre Pasdeloup.

The orchestrations of the show were recorded early November at Studio Midi Live by Orchestre des Frivolités Parisiennes conducted by Larry Blank in person. 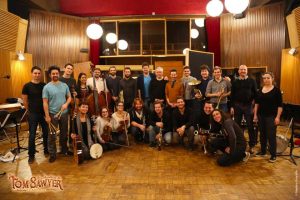